The blog for the equal pie-portunist. Making the world more delicious, one pie at a time.

For Your Pies Only 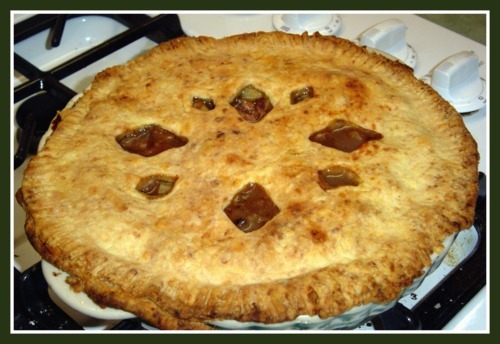 Have you ever taken a bite of food and get a little weak in the knees from how good it tastes?  Have you ever exclaimed that there was a party in your mouth?  For me, this steak and ale pie is one of those foods. 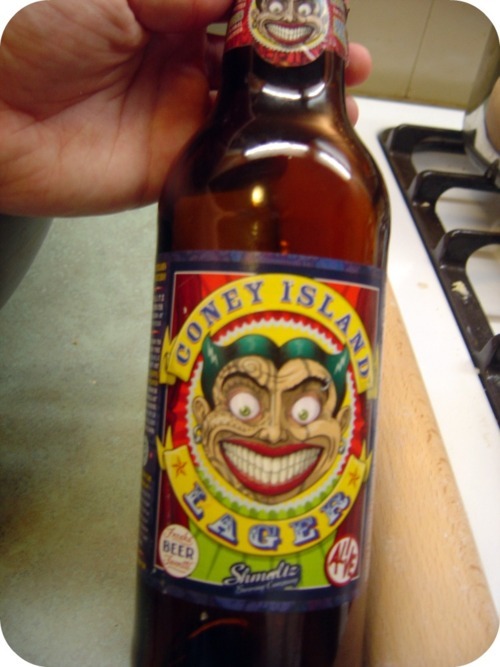 I made this pie for a dinner party on a cold January night.  A small gathering with good food and good company.  As a rule when cooking with alcohol, use something that you find tasty on it’s own…if you wouldn’t drink it outside the cooking, don’t use it.  I am a huge fan of microbrewed beers, especially those with a little hop to them; so, when looking for the ale for this pie I chose the Coney Island Lager by the Shmaltz Brewing Company. The simmering beef and ale and onions smells heavenly.  I love all the smells of this pie from beginning to end.  Beware of those smells though…they make hungry folk start to chomp at the bit for the pie to be done!  As we waited we talked about the fate of the American education system, world peace, our favorite musicals and had a few glasses of Kung Fu Girl wine (which is quite tasty).

When the pie was finished, it didn’t take long to disappear from the table (even with a draw for who would be the lucky one to get the last piece).  I will be making this delicious pie again for National Pie Day! Preheat the oven to 400 degrees F (200 degrees C).  Prebake the bottom pie crust for 10 minutes and set aside to cool. 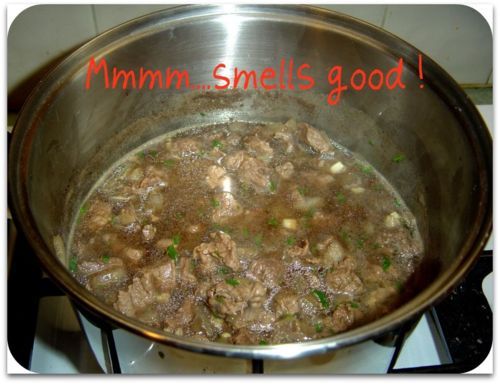 Place the beef stew meat, onion, and ale in a large saucepan. Simmer over low heat until the meat is tender, about 30 minutes.

Season the beef with garlic, thyme, parsley, Worcestershire sauce, salt and pepper. Mix in the potatoes and mushrooms. Cover and simmer over medium heat for 10 to 15 minutes, until potatoes are just tender enough to pierce with a fork.

Spoon a small amount of sauce into a seperate bowl.  Whisk with the flour until completely combined and stir into the beef. Simmer until slightly thickened. 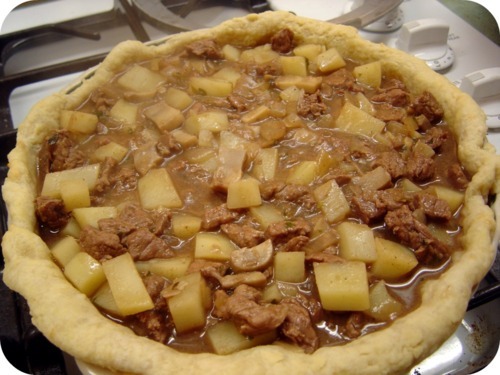 Spoon the beef mixture into the crust and top with the remaining pie crust. Cut vents in the top crust for steam and crimp the edges to seal them together.

Bake until the crust is golden brown and gravy is bubbling, 35 to 40 minutes.  Halfway through, rotate pie so that the side that faced the back of the oven now faces the front.  Put a crust guard or tinfoil on the outer edges to prevent burning the crust.

Combine flour, sugar and salt in a large bowl.  Toss by hand to mix.  Scatter butter over the dry ingredients and toss to mix.  Use a pastry blender/2 chilled knives to cut butter into the flour until it has small split pea size crumbles (if you’ve ever made a crumble topping before, this is what it makes me think of).  Add shortening and do the same process so that all fat is cut into small crumbles in the flour mix.  Add cheddar cheese and toss with a fork to mix well.

Sprinkle half the water over the mixture. Continue to toss with fork to dampen the mix.  Add remaining water 1 ½ to 2 tablespoons at a time.  Continue to toss and mix, making sure you pull from the bottom on the upstroke and gently press down on the downstroke.  The dough should be ready to pack.  If it seems to need more water, sprinkle 1 teaspoon at a time until it can be packed.

Pack dough into two balls (one slightly larger for the bottom crust) as you would pack a snowball.  Knead each ball once or twice on a floured surface and flatten balls to ¾" discs.  Wrap in plastic wrap and place in refrigerator for at least an hour or overnight before using to bake.